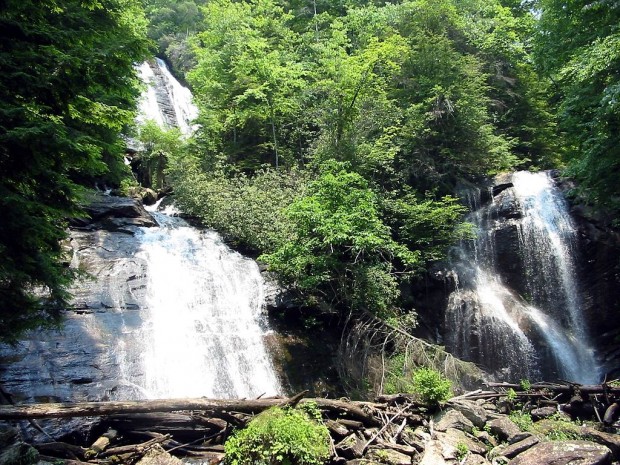 Just a few miles out of Helen, Georgia, are the Anna Ruby Falls, a pair of waterfalls from two different streams, both tumbling down right by each other, and forming Smith Creek, which then flows into Unicoi Lake, in Unicoi State Park. The falls were named after the daughter of Captain John Nichols, an officer during the Civil War, and major landowner in these parts. In 1920, the United States government purchased the land, which together with parts of the Cherokee National Forest, became the Chattahoochee National Forest.

The twin waterfalls are fed by two different streams: Curtis, and York Creek. Both of the creeks begin atop Tray Mountain, the sixth highest peak in Georgia. The creeks are fed by a combination of springs and runoff, and bubble along until they come and tumble down the rock faces, as they were destined to do. Curtis Creek drops a whopping 153 feet, flowing down the rock face, while York Creek tumbles a smaller—but still impressive—50 feet, splashing over rocks and boulders.

The Anna Ruby Falls are located inside a National Park, but to get to them you will have to pass through Unicoi State Park. Unfortunately, admission to one doesn’t pay for admission to the other—although Unicoi will allow you to pass through for free, if you’re just going to the falls. Admittance to the falls costs $3/perso for those 16 and older, with the park open from 9am—6pm, and staying open until 7pm during the summer months. Getting to the falls, you’ll follow a half-mile paved trail along Smith Creek until you get to two viewing decks, which provide you a very nice sight of both the falls. Because of its proximity to the town of Helen, the falls are relatively popular during certain times of year. A visitor center is near the falls, with restrooms, drink & snack machines, and a gift shop. A few picnic tables rest outside, for your convenience.

Josiah works primarily in web development and writing, and once wrote a 50,000 word (unpublished) novel in a month. He also loves to travel, and explore different cultures and locations.

GEORGIA THINGS TO DO