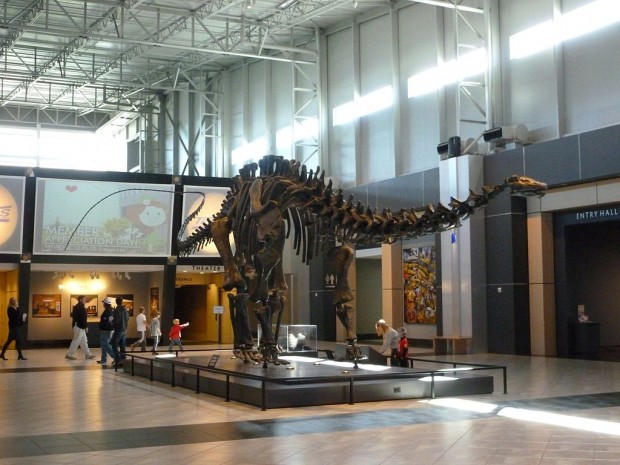 It’s hidden away in the little town of Cartersville, but the Tellus Science Museum is in the same league as some of the most famous museums in the country. Its extensive collection of fossils and minerals make it a great afternoon getaway for any geophile, while the visual history of the evolution of 20th-century transportation—plus the planetarium and hands-on exhibits for kids—expand the experience.

The dinosaurs are one of Tellus’ biggest draws. All the classic species are here, from Tyrannosaurus to the Diplodocus, together with the giant skeletons of extinct animals from all over the kingdom. Whether plesiosaur, sabre-tooth cat, mastodon, or megaladon is your favorite, you’re sure to find it here. Some of the specimens are truly impressive—the museum’s megaladon (a prehistoric shark) has a set of jaws nine feet wide, while another display features dinosaurs from the southeastern United States posed in in a battle to the death. Georgia is a hotbed of Cretaceous fossils, and many of the skeletons found here are native to the state. One gallery is devoted to extinct aquatic creatures that once swam the Georgia coast, including gigantic fish and sea turtles.

The Weinman Mineral Gallery is another significant portion of the museum, with over 50 cases of precious stones. Exhibits display the world of minerals on a scale ranging from the continental to the tiny, with hands-on demonstrations of plate tectonics and an exhibit showing how sparkling gems are created from uncut stones. An enormous visual periodic table on one wall provides examples of each element with explanations of their use, while in front of it is spread an array of huge geodes and crystals.

Science in Motion is the name of the sprawling gallery of vehicles, spanning over a hundred years of locomotion. Vintage 1880s automobiles sit side-by-side with their modern counterparts, and a steam train engine looms over scale models of all the major NASA shuttles and rockets. The history of powered flight is fully displayed, with replicas of both the Wright Flyer and Sputnik, together with a cutaway Apollo I and several other notable milestones on humankind’s path to the stars.

And if you’re still looking for more, there’s the Collins Family My Big Backyard, a fun interactive exhibit where kids can learn about everything from the weather to magnetics and engage in all sorts of educational play. There’s the planetarium, as well, and an observatory with a 20-inch telescope where you can view the universe for yourself. On weekends you can encounter the Solar Decathlon House, Georgia Tech’s entry in an international competition for eco-friendly housing design, and if you’re in Cartersville at the right time, you can participate in one of the museum’s many annual and monthly events.

GEORGIA THINGS TO DO